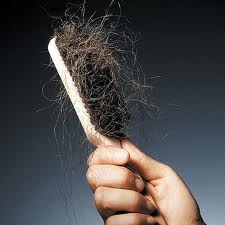 For about the last, oh, 15 years or so, I’ve been complaining to anyone who’ll listen that my hair is falling out. No one ever seems to believe me, but it’s true. When I was young, I used to have to connect two ponytail holders (the ones with the balls on the ends of course) together to fit it around my pony. When I’d try to slick my hair back, it would never lie flat, because my locks were sooooo luxurious.

After years of frying, dying, and laying to the siding, I started to notice my drain seemed to be running slow all the time. Eventually I admitted it was because I seemed to be on a slow path to the wig-wearing life of my ancestors. Until I got pregnant.

Most of the time I wear my hair curly, and have to condition and comb it out every day for it to not look like I’m trying to emulate Bob Marley. When I got pregnant, I became joyous when I realized less hair than usual was coming out in the comb. Then it pretty much stopped coming out at all. And I had hair. Long, beautiful hair. Shining, gleaming, streamingflaxenwaxen. Down to there hair. And life was beautiful.

Then, about six months after Stella was born, the fallout began. Hair in the comb, slow drain…all my old markers of my impending doom of baldness were back. And now there was one more. Living in an apartment with carpet and a baby I vacuum frequently, and the roller of the vacuum is starting to catch more hair than my brush. Even my husband, who always tells me I’m buggin when I say I’m losing it has commented on the amount of hair around the house, in odd places. He tried to cover up his smack-down by saying it’s because my hair is so long now, but we both know the truth.

I know all mothers complain of hair loss after baby, but from what I’ve read by a year after birth your hair should be back to normal. Either my normal was way more bald than I realized or this is poop.

Will this ever end? Must I stay pregnant as long as possible just to relive my old mane glory days? At least wigs have improved since my grandmother was wearing them: ash brown colors that would never had grown out of her head. She always left a little of her natural grey hair out on the sides to “make it look more natural”, which of course just made it look more like a wig.  I’m coming to wigland Grandma!